What Color Is Caviar?

When most people think about caviar color, “black” or “red” might be the two main options that come to mind. Although those are classic terms for Sturgeon vs. non-sturgeon roes, there is a wide variation in colors from species to species, as well as within the same species. What does that color say about the caviar itself? We will hash that out below.

The most common terminology for caviar colors are:

Let’s dive into the details of caviar and what the color actually means. As we speak of caviar below, we will use the USA’s definition of caviar and include all roe, instead of just highlighting the traditional definition for caviar. The most common way caviar is categorized is by the colors red and black, which loosely separates sturgeon caviar from fish roe. We will cover these two main colors in detail first and then get more granular with others.

“Black caviar” typically covers roe that comes solely from the sturgeon fish. Though the name might make one assume it’s just being categorized by being black, the colors under this term actually range from black or brown to gray or gold. So, you can expect these colors of caviar from Beluga, Sturgeon, Osetra, Kaluga, and many other fish from the Acipenseridae family. Though the terminology can be confusing, this is what many consider true caviar because it comes from the sturgeon fish.

One sturgeon that almost always has small, jet black eggs is the American Hackleback (Scaphirhynchus platorynchus). Color isn’t really a factor of why Hackleback is cheaper than other varieties of sturgeon, it’s more due to size and faster maturation of species. Some people really love the color constancy of species like Hackleback because they know what to expect. 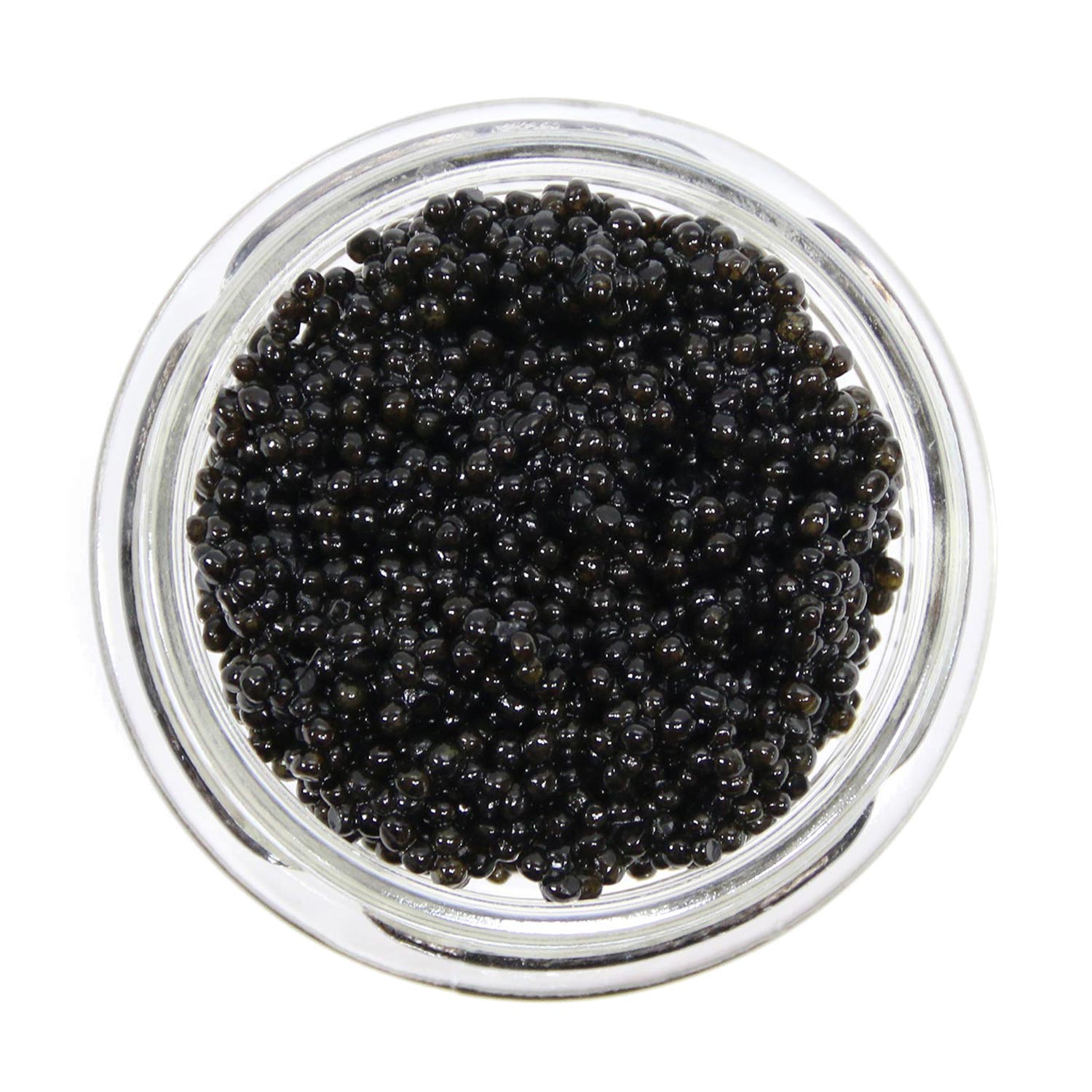 You may also come across other non-sturgeon black “caviar.” One example is Bowfin, which is not a sturgeon but produces roe that is naturally dark in appearance, usually with a reddish hue. Another example is the roe of the Cyclopterus Lupus or Lumpfish. The natural egg color actually varies from pale tan to brown but is almost always dyed black or red for consistency. The eggs are also generally very small in size. Technically, these are simply fish roes, but good examples of varieties you may come across that are black and often called caviar. 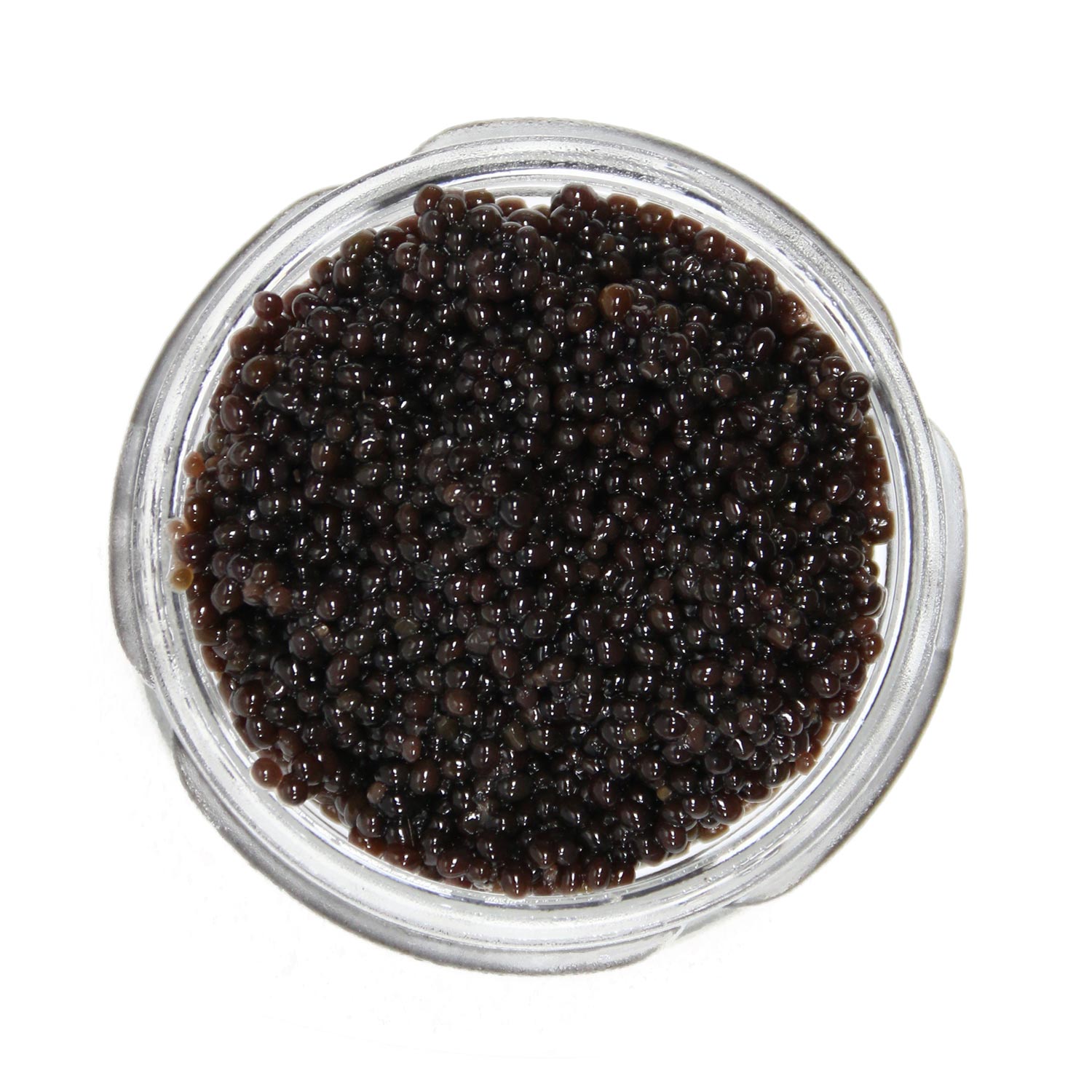 Red caviar comes from a couple of different types of fish, but most commonly it comes from Salmonidae. You can also expect to receive red caviar from trout and whitefish. Technically, red caviar is not true caviar and instead just non-sturgeon fish roe. Similar to black caviar, the colors of red caviar range and will encompass other hues like orange or yellow.

Since Lumpfish roe is also commonly dyed red along with the black variety, you can expect many to group this type of caviar in with “red caviar.” 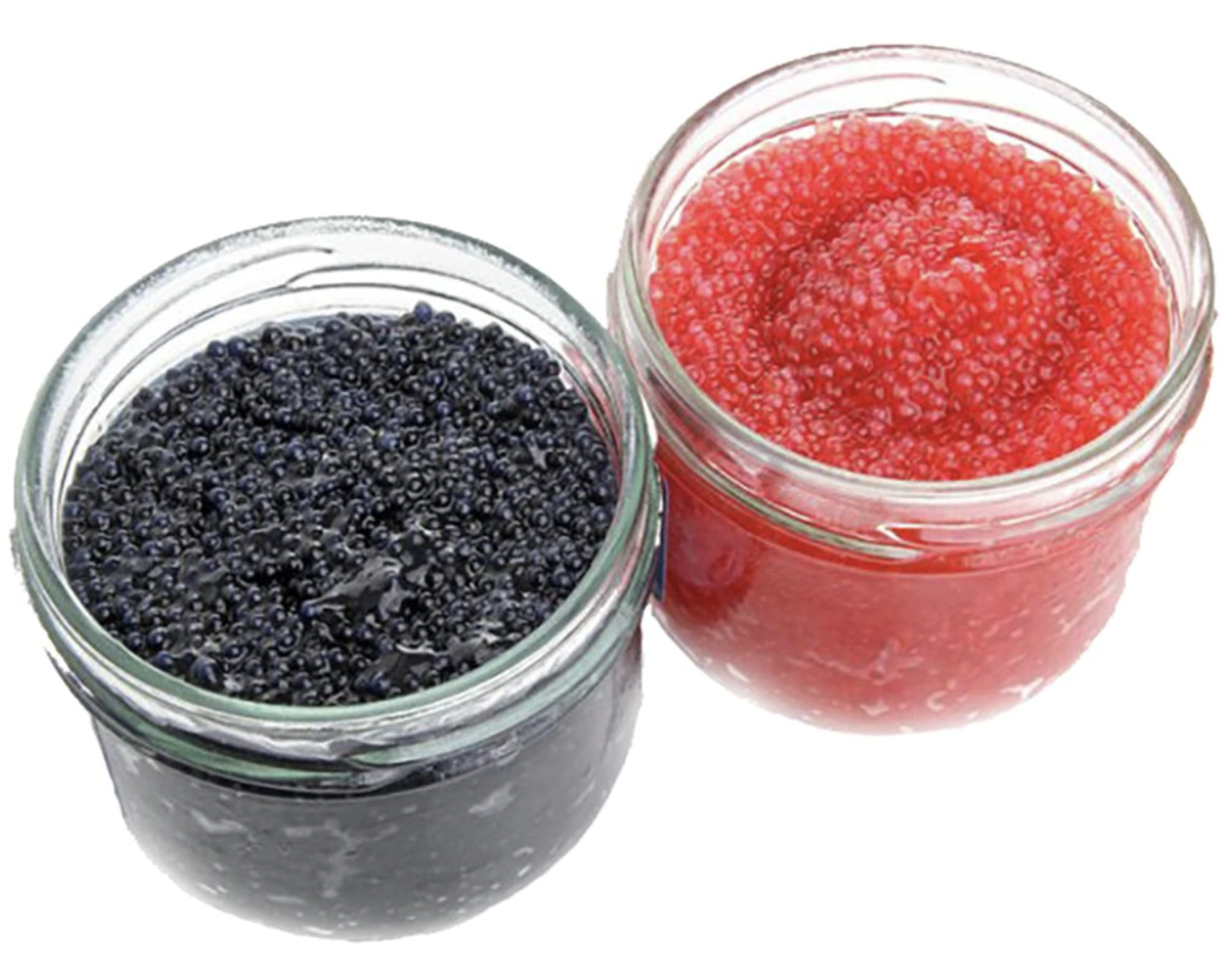 This color of caviar comes from many fish, typically Sevruga sturgeon or sometimes Paddlefish, but most notoriously the Beluga Sturgeon. The shade of color can be different from fish to fish, but it’s generally in the silver / gray palette. It can also appear clear or milky. When you inspect roe closely, you’ll notice there is an eye in each egg. This is the physical egg, while the egg sac is the surrounding gel. This color of caviar is unique but typical of a few species. 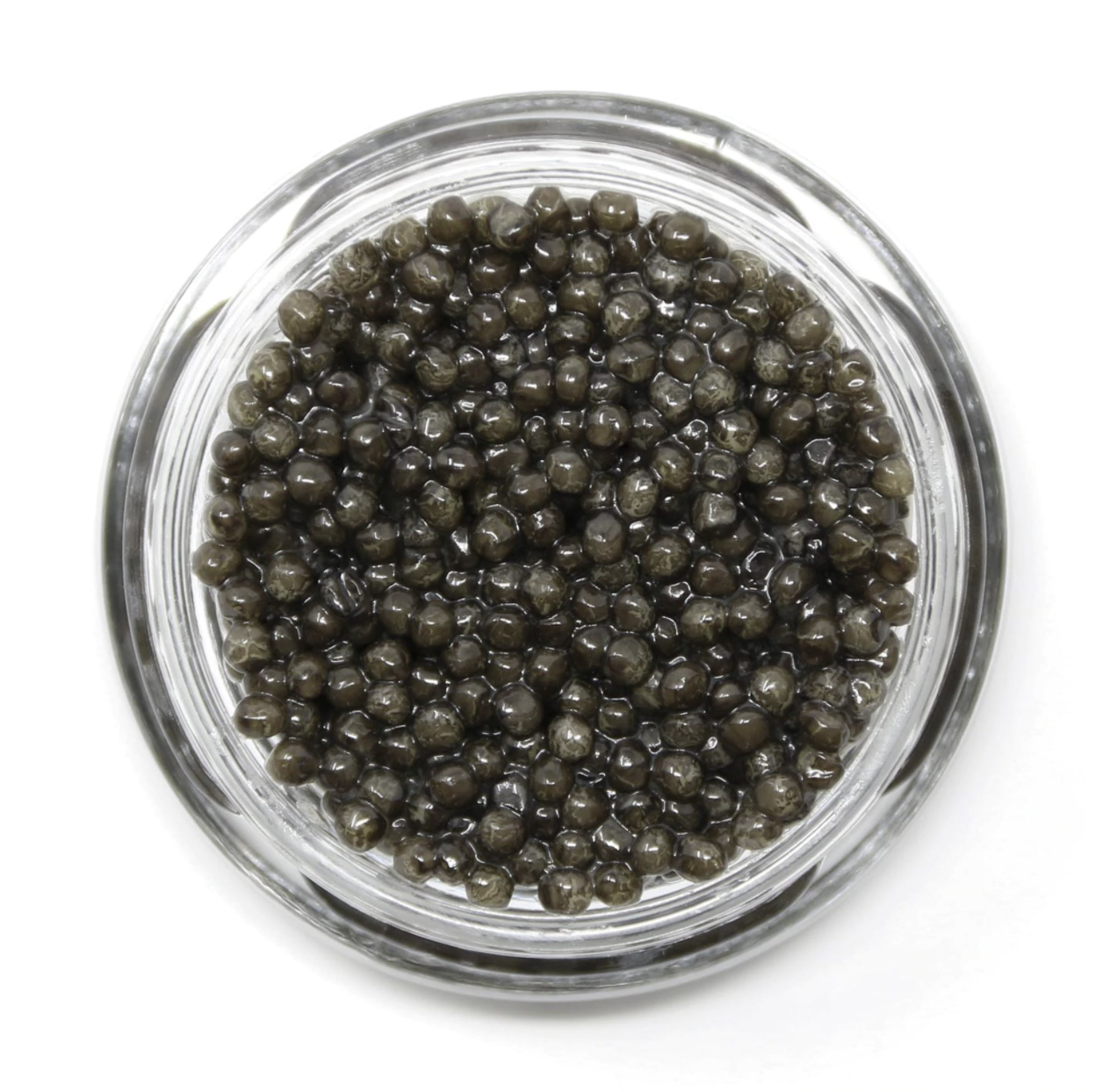 One of the most common amber-colored caviar comes from the Osetra sturgeon. There are various colors of Osetra, but amber is the most common. Osetra can also be gold, but lighter colored sturgeon caviars are most rare, therefore most coveted and higher in price. You can find copious amounts of beautiful amber Osetra at Karat, one of the world’s oldest sturgeon aquaculture farms located in Northern Israel. The conditions there are impeccable with the purest cold, spring water, and extreme attention to fish health, quality of life, and sustainability. The caviar beads are pleasantly firm and medium in size with a very nutty and rich flavor, but we digress. 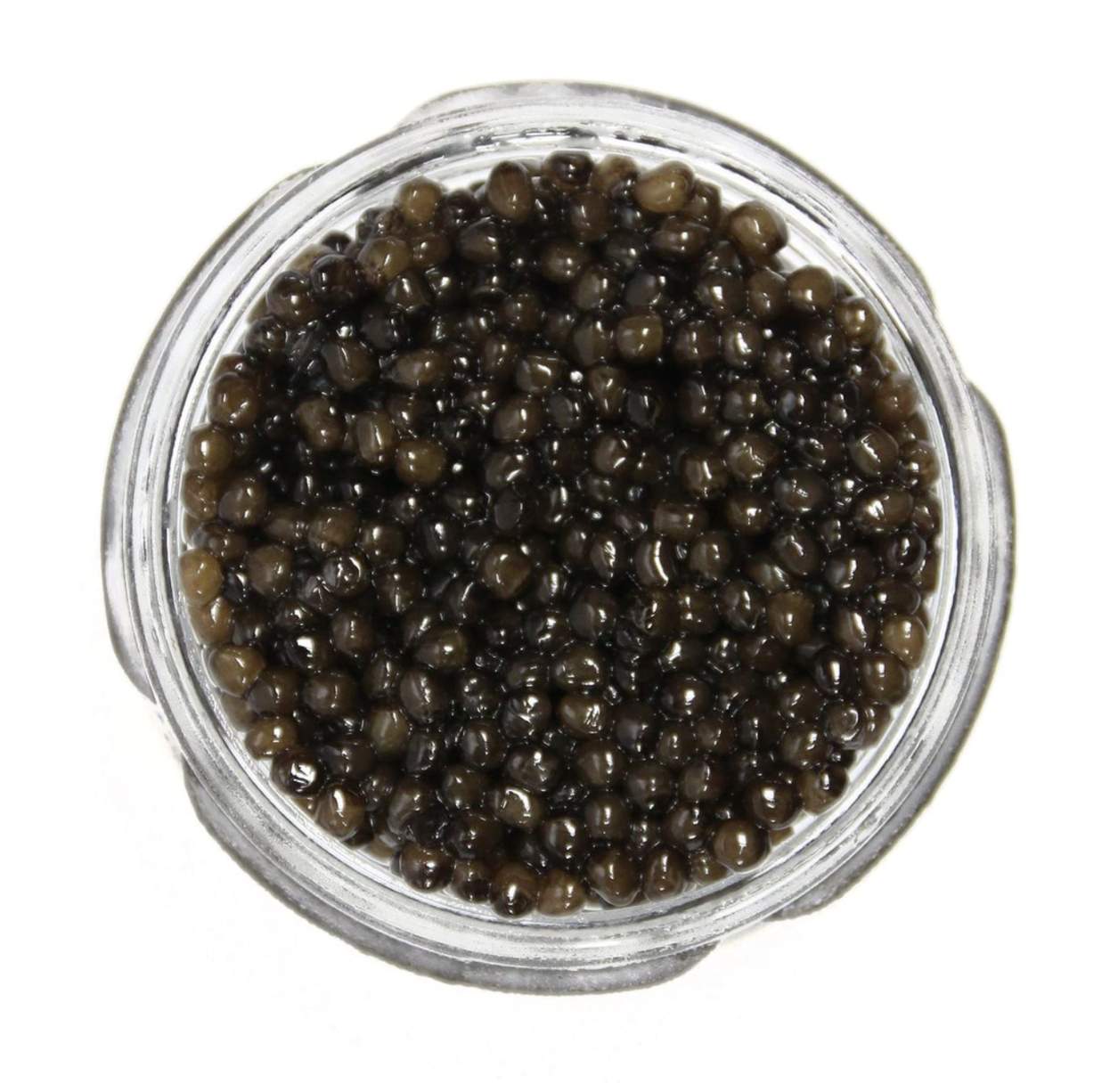 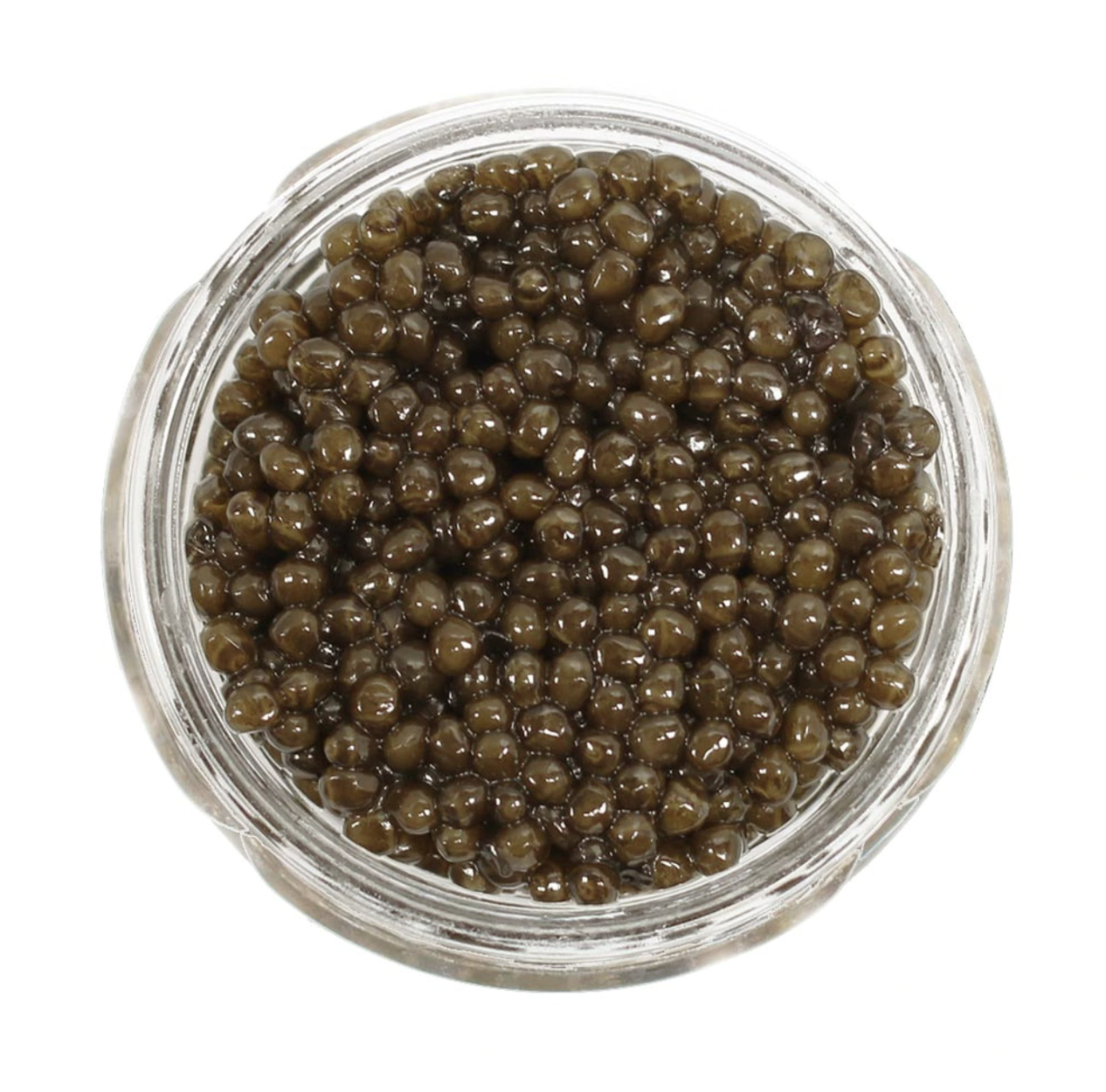 Brown-colored caviar is slightly darker than amber and also common for classic to royal grades of sturgeon caviar. Sometimes there are both brown and gray hues in a lot of caviar, the terminology of color will be up to the producer, so sometimes it can be a bit vague. Brown hues also commonly coincide with gray hues in some varieties of sturgeon caviar, this being true to some colors of Beluga. 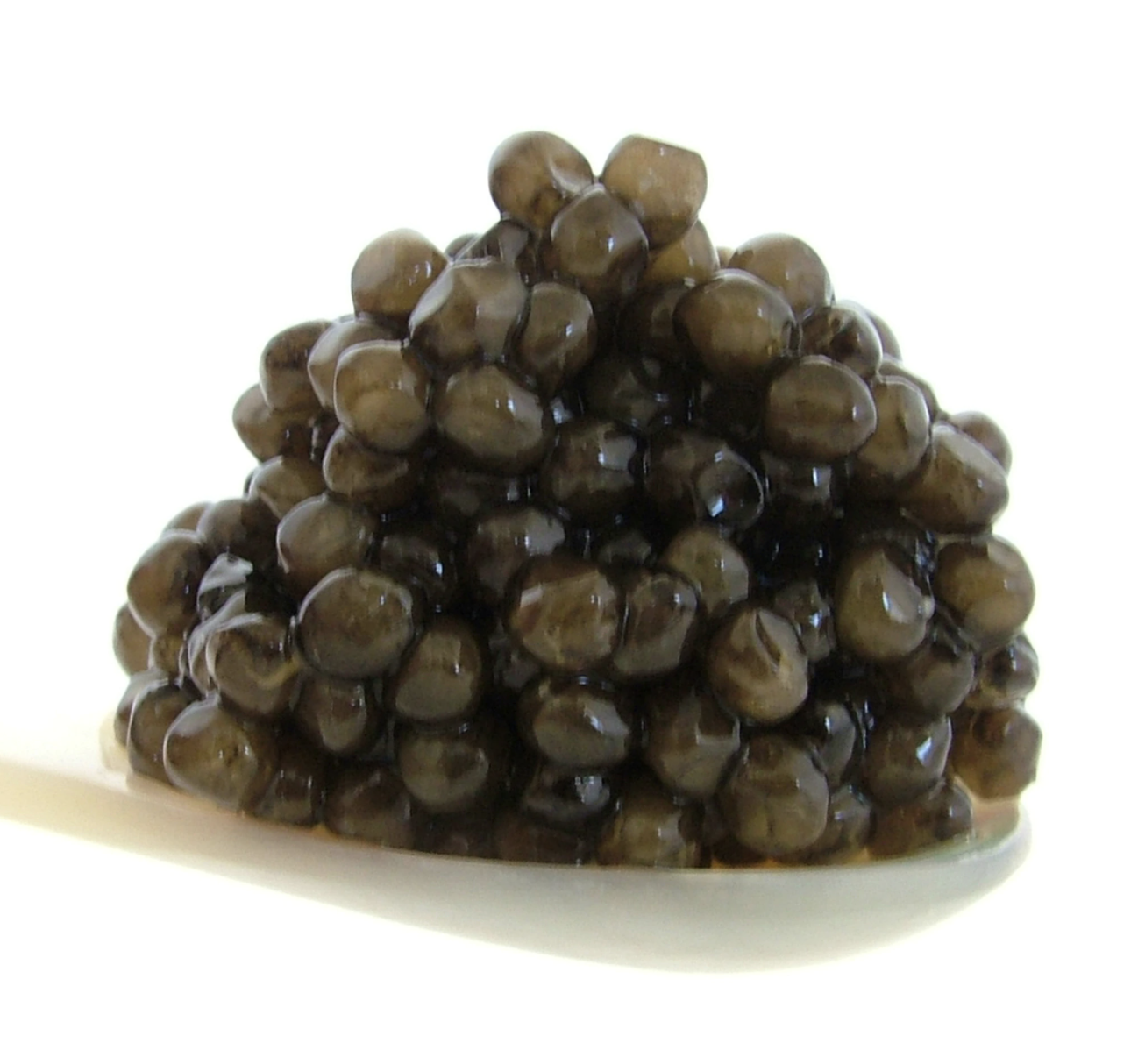 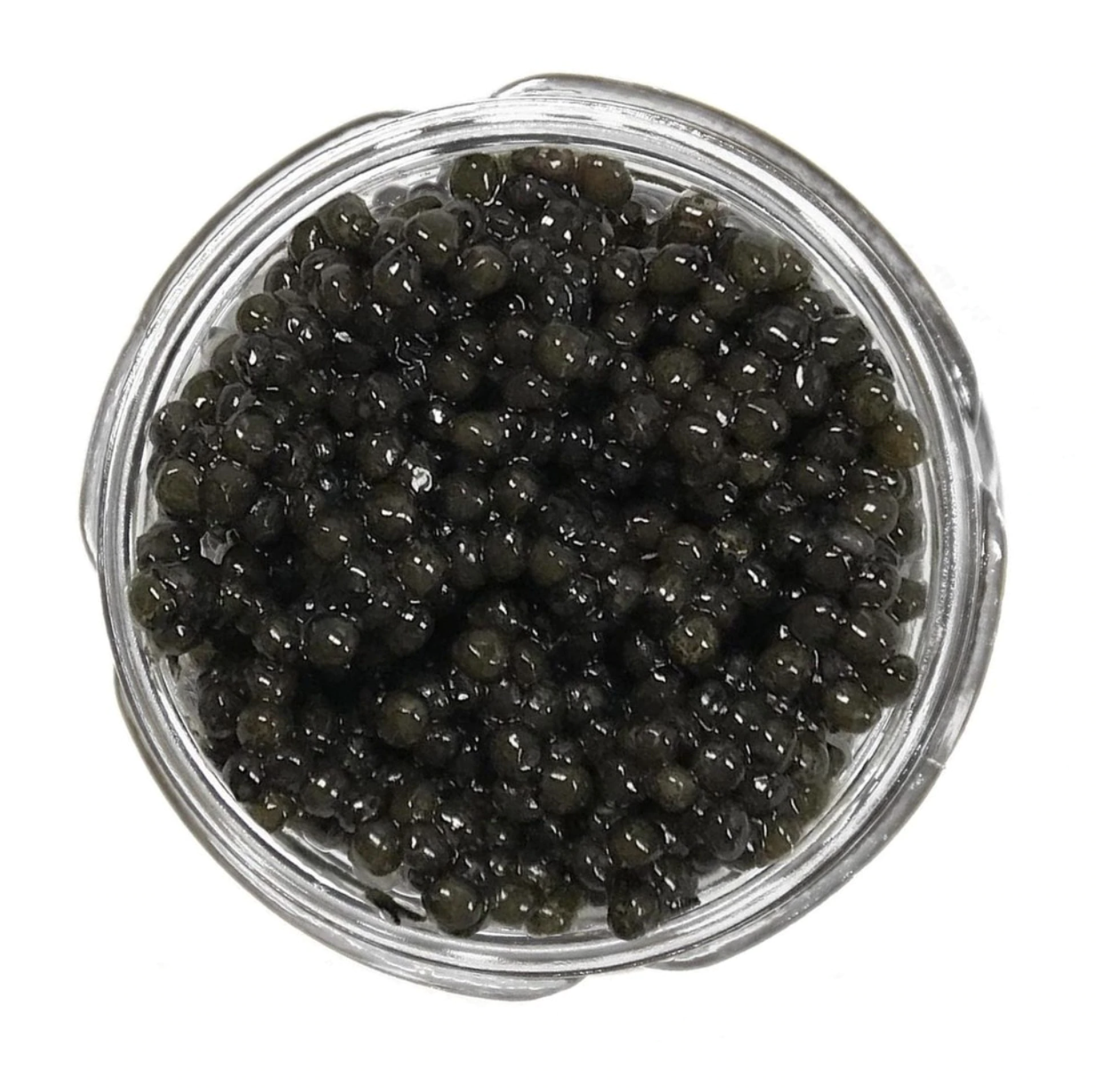 Gold caviar of a true sturgeon is the most coveted color. Because only a very small fraction of sturgeons produce light eggs, they are rarer and therefore more expensive. Make sure when you look for gold caviar that it is imperial or of the highest grade, ensuring you’re not just paying for color but also all other factors that make caviar the best. 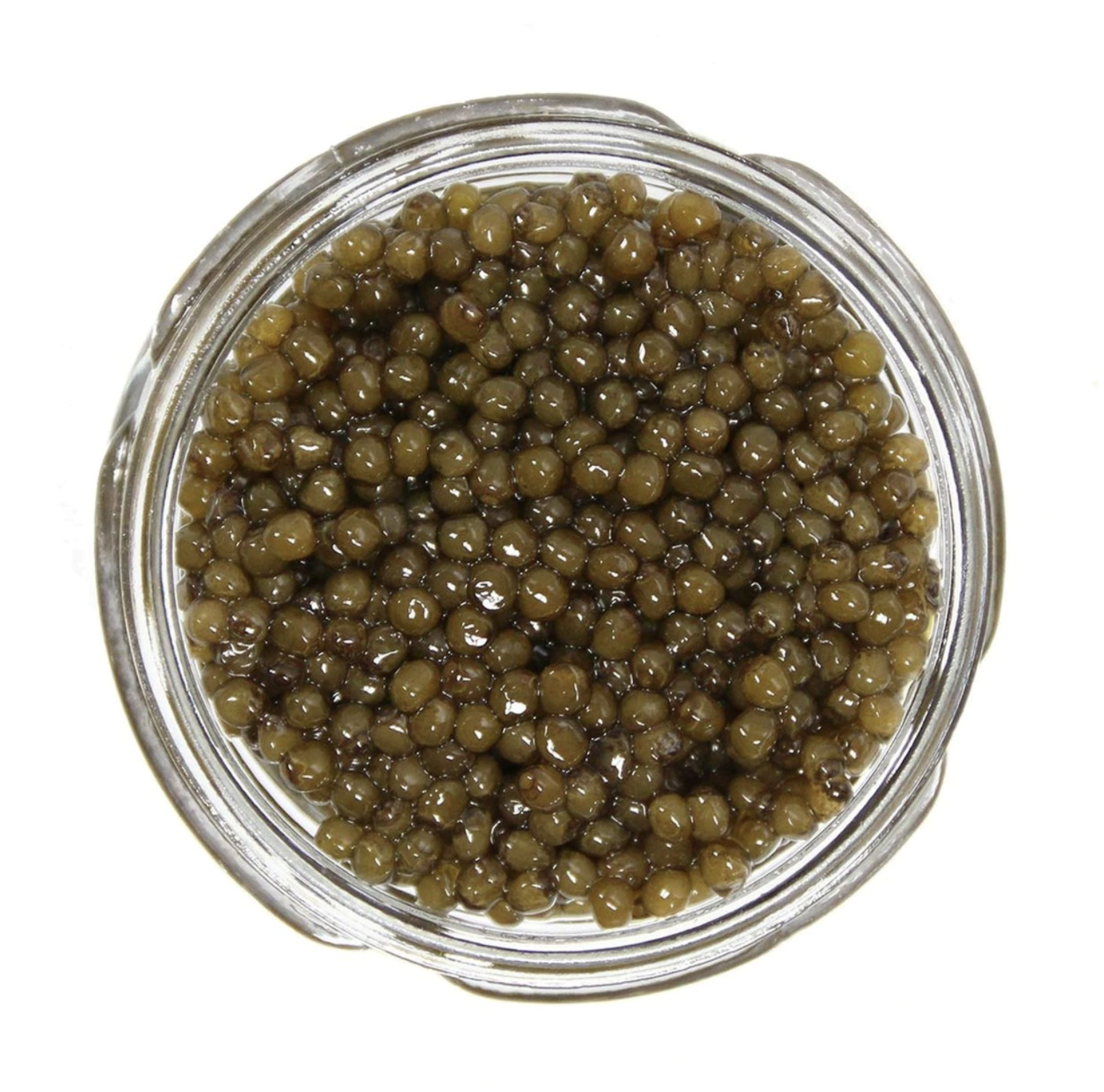 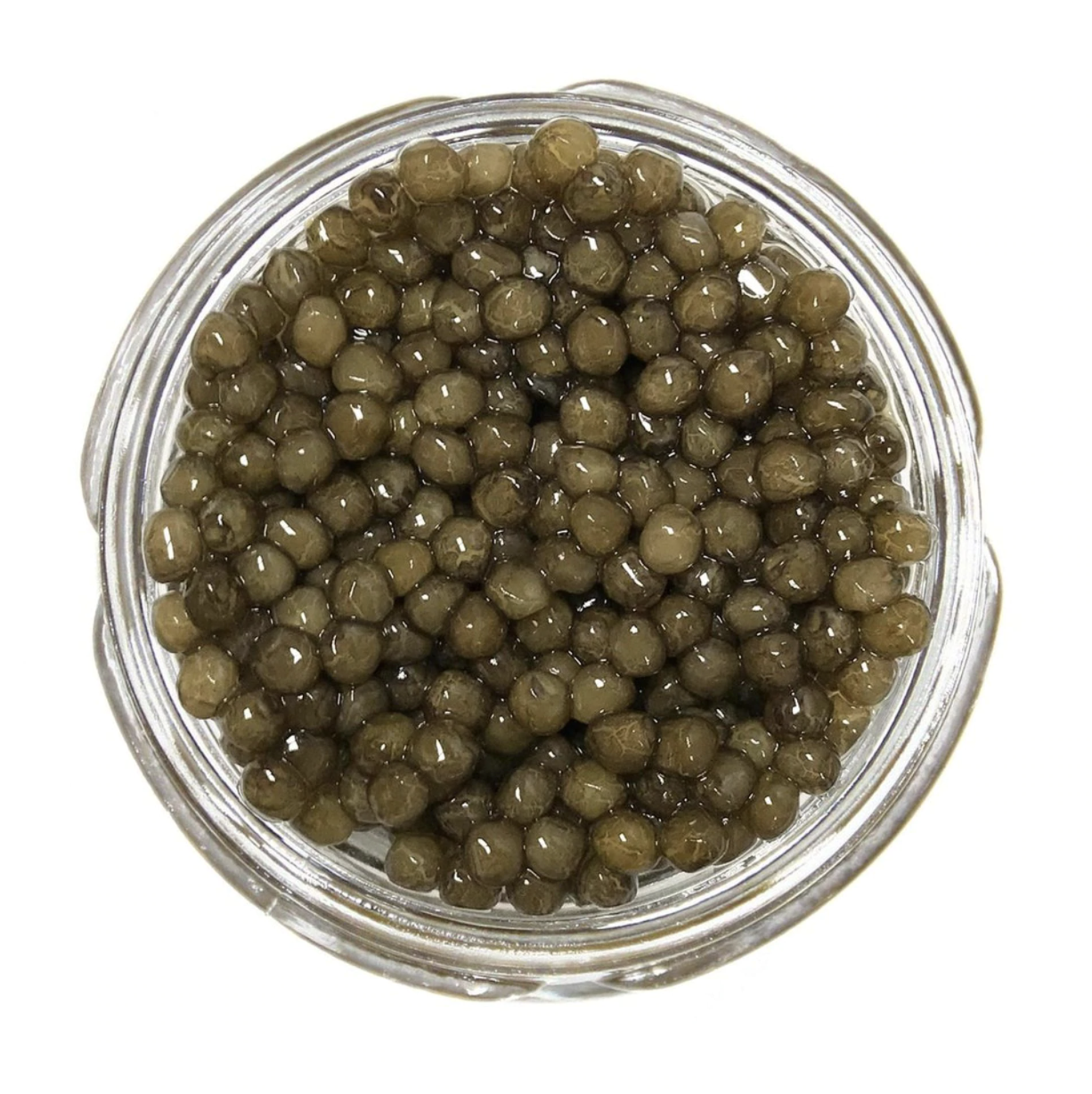 Salmon eggs can be various shades of orange and red. It’s a very common variety that’s used for its affordability and unique texture.

Roe from the carp fish is orange in color. It’s commonly smoked, and many people find that it has a similar profile as smoked salmon.

Roe from Rainbow Trout is also orange and large compared to sturgeon but smaller than a salmon egg. It doesn’t have a very salty flavor like some of the other similar varieties. It’s commonly produced through farming methods, so it’s very affordable with great flavor. 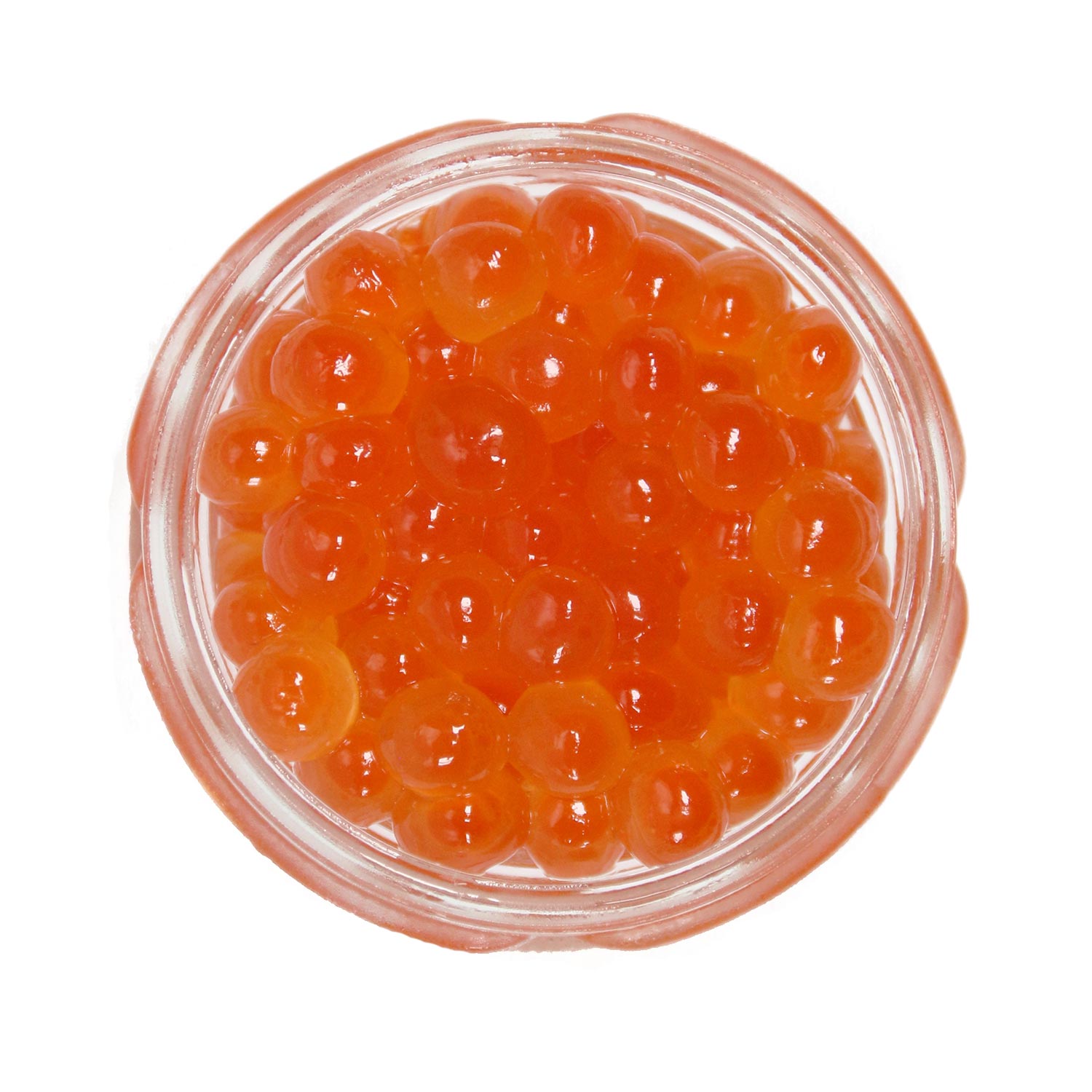 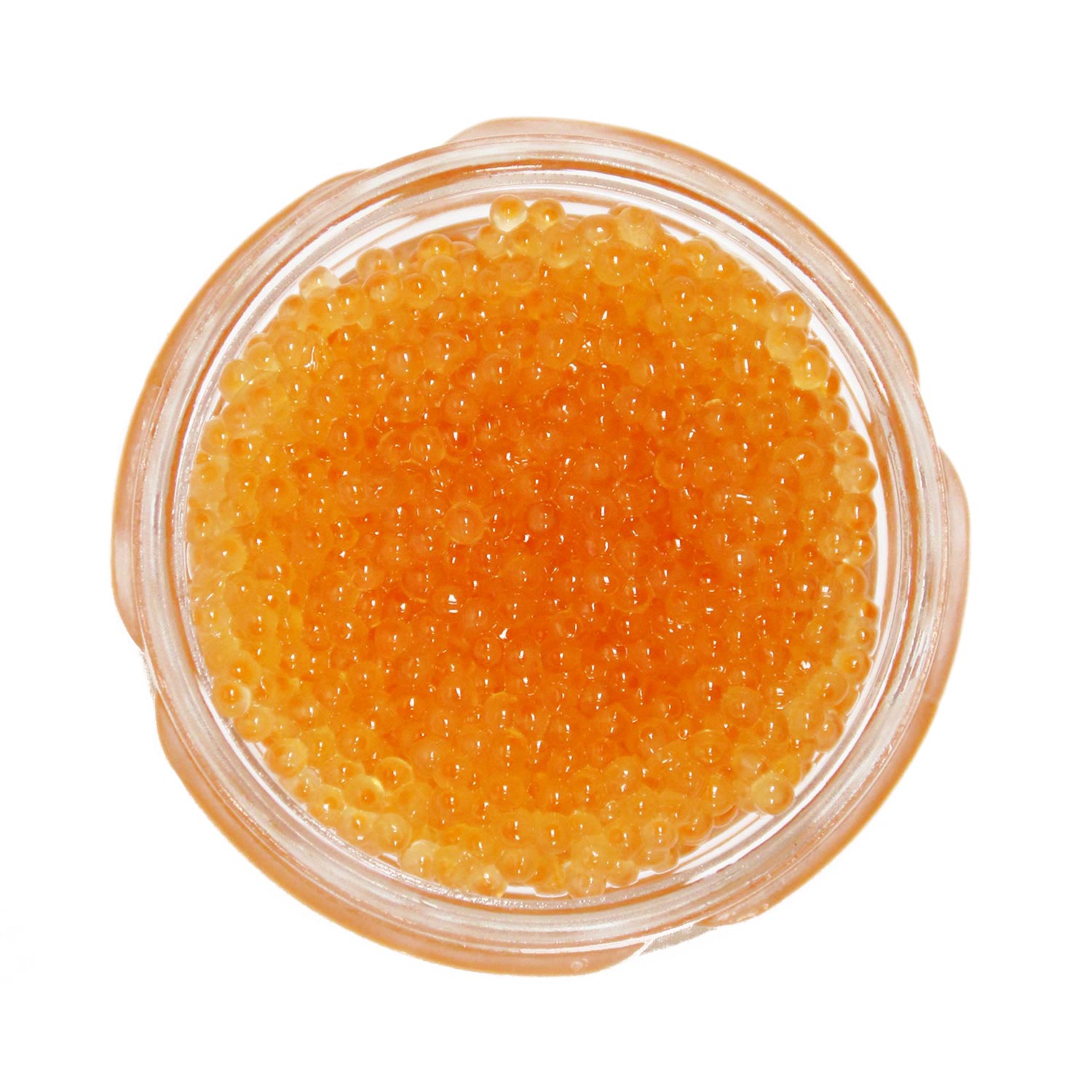 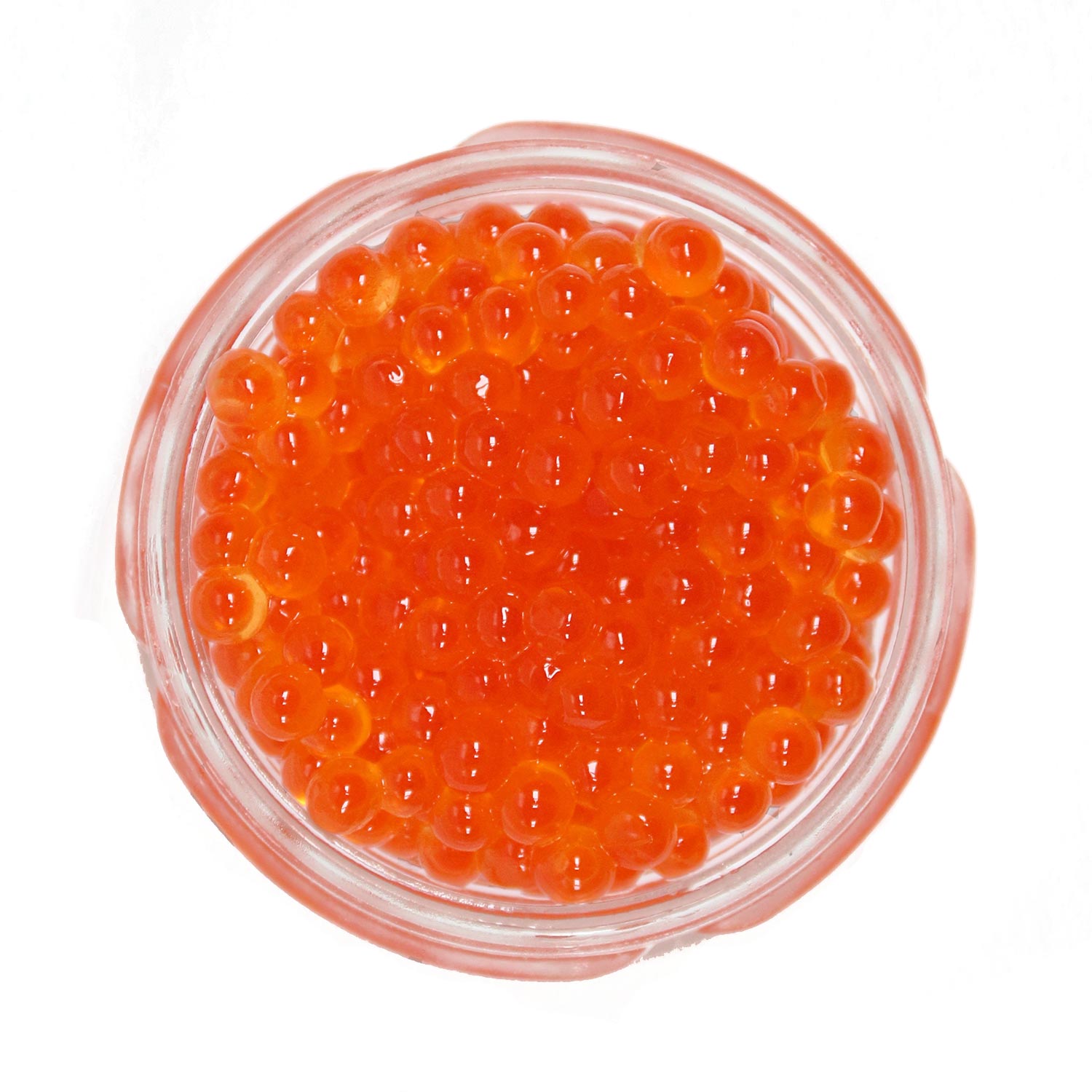 Yellow is usually associated with roes but can also come from an albino fish. One example is the Sterlet, one of the original wild Caspian Sea sturgeons that has long been a fine delicacy among royalty. Its roe is normally gray to brown but when the Sterlet is albino, the eggs are an opaque, milky yellow color. This is also the case for other albino fish.

Whitefish roe is also yellow or golden to light orange. The eggs are tiny like Bowfin and have a very mild flavor, making them commonly used in a variety of dishes. These fish are typically found in the Great Lakes region. We like it cold-smoked.

You can also expect to see bright clear, yellow caviar from Arctic Char and our special golden Rainbow Trout. Rainbow Trout is almost always orange, but our golden variety is this color due to a specialized astaxanthin-free feed at the farm. It’s 100% natural but lacks red hues, making it unique and eye-catching. 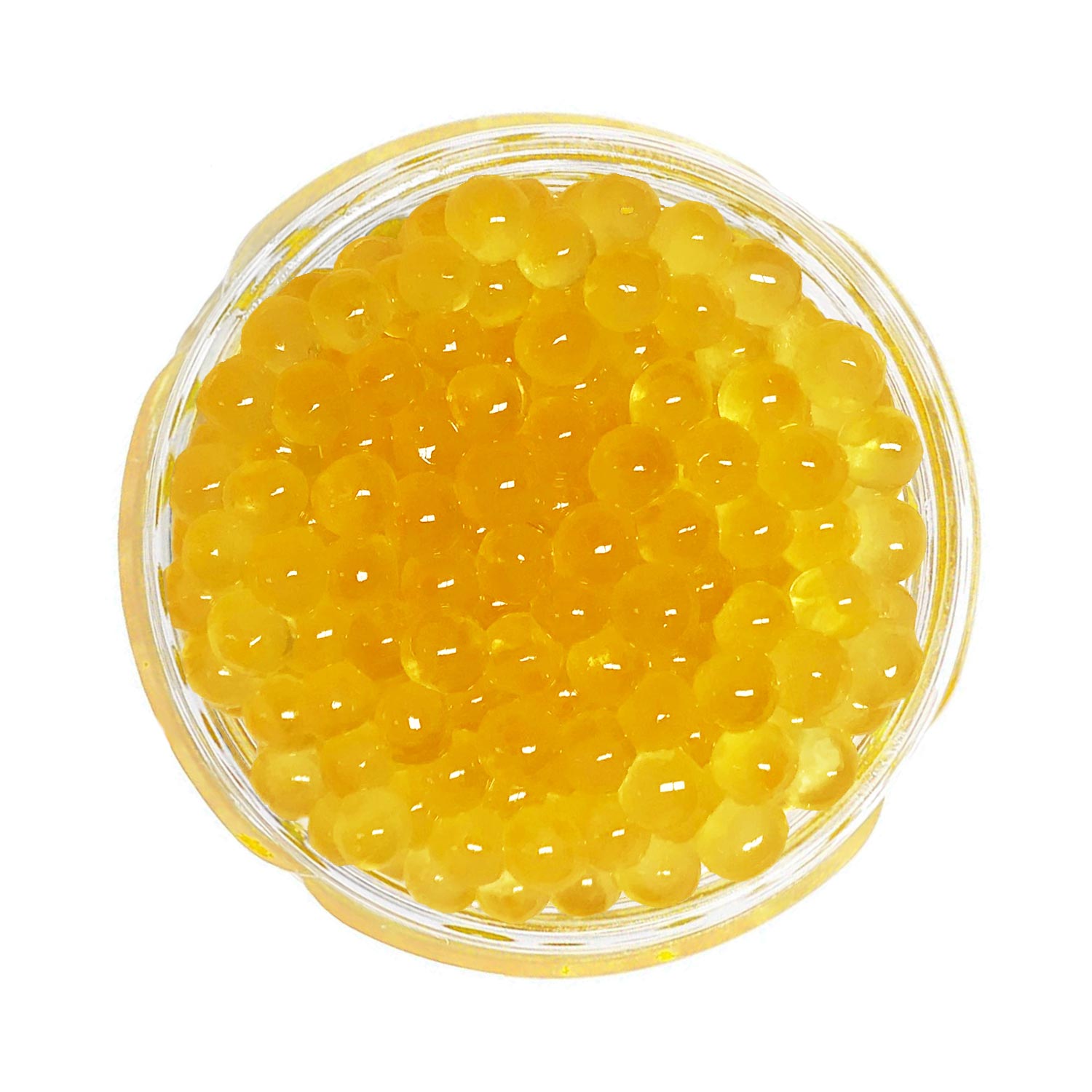 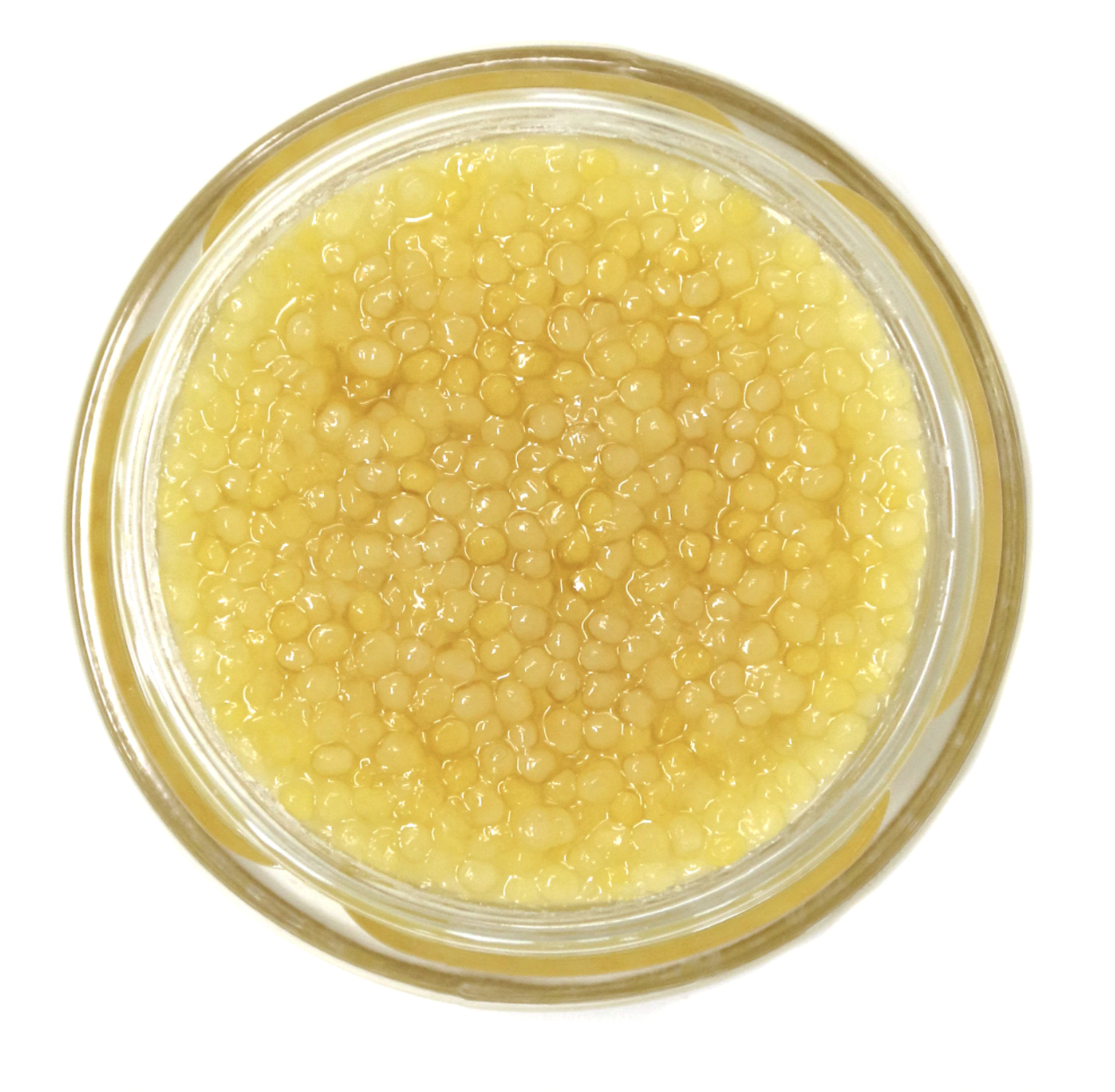 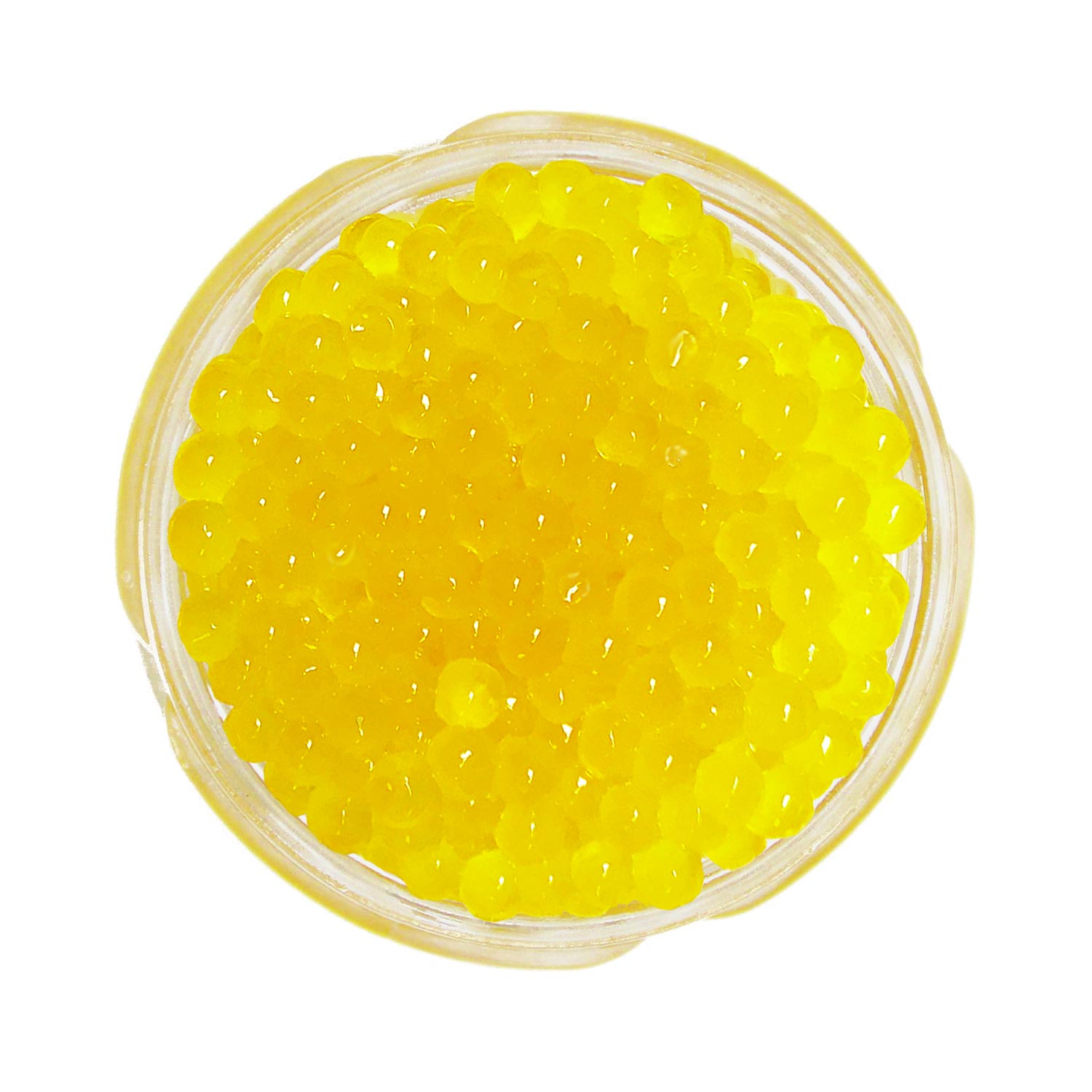 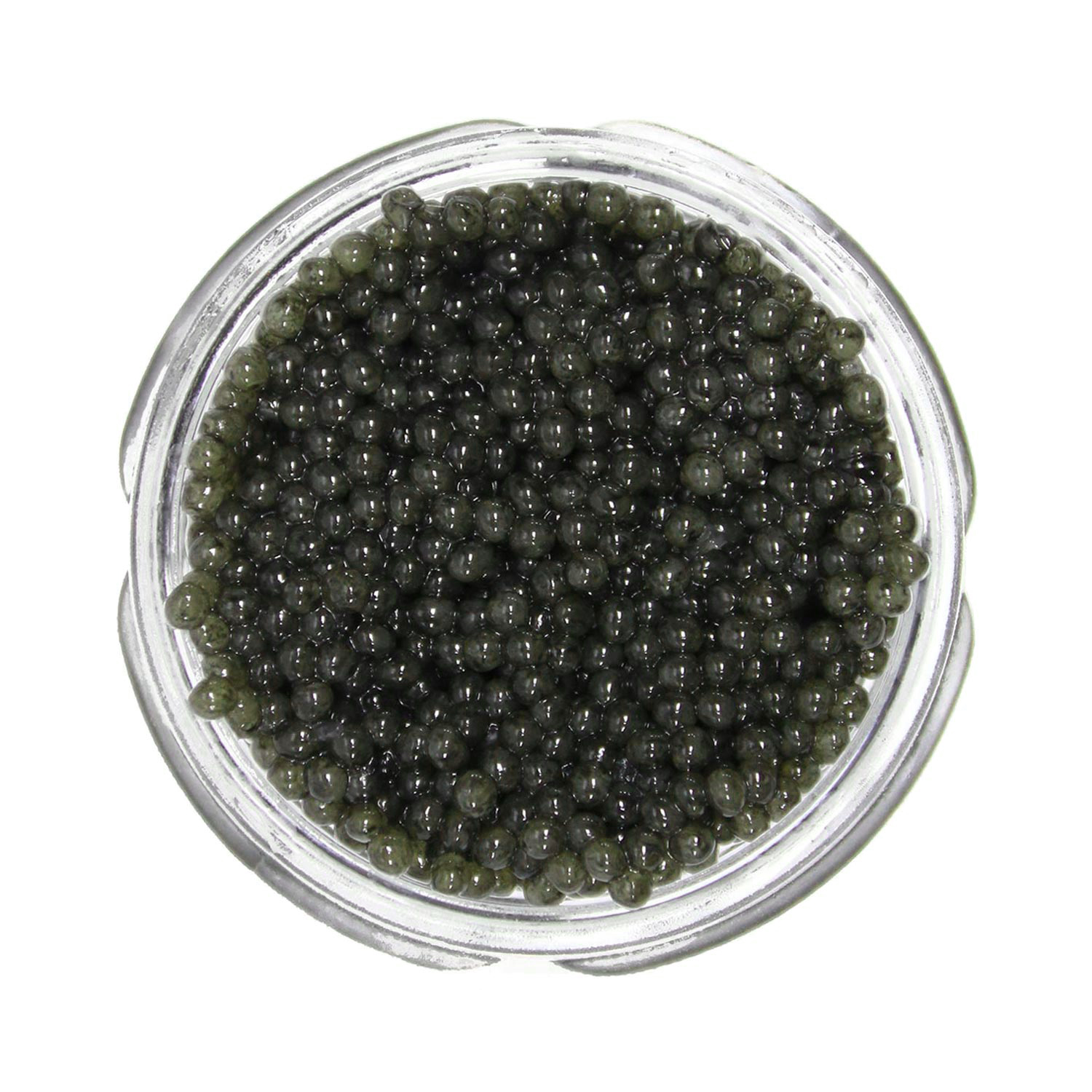 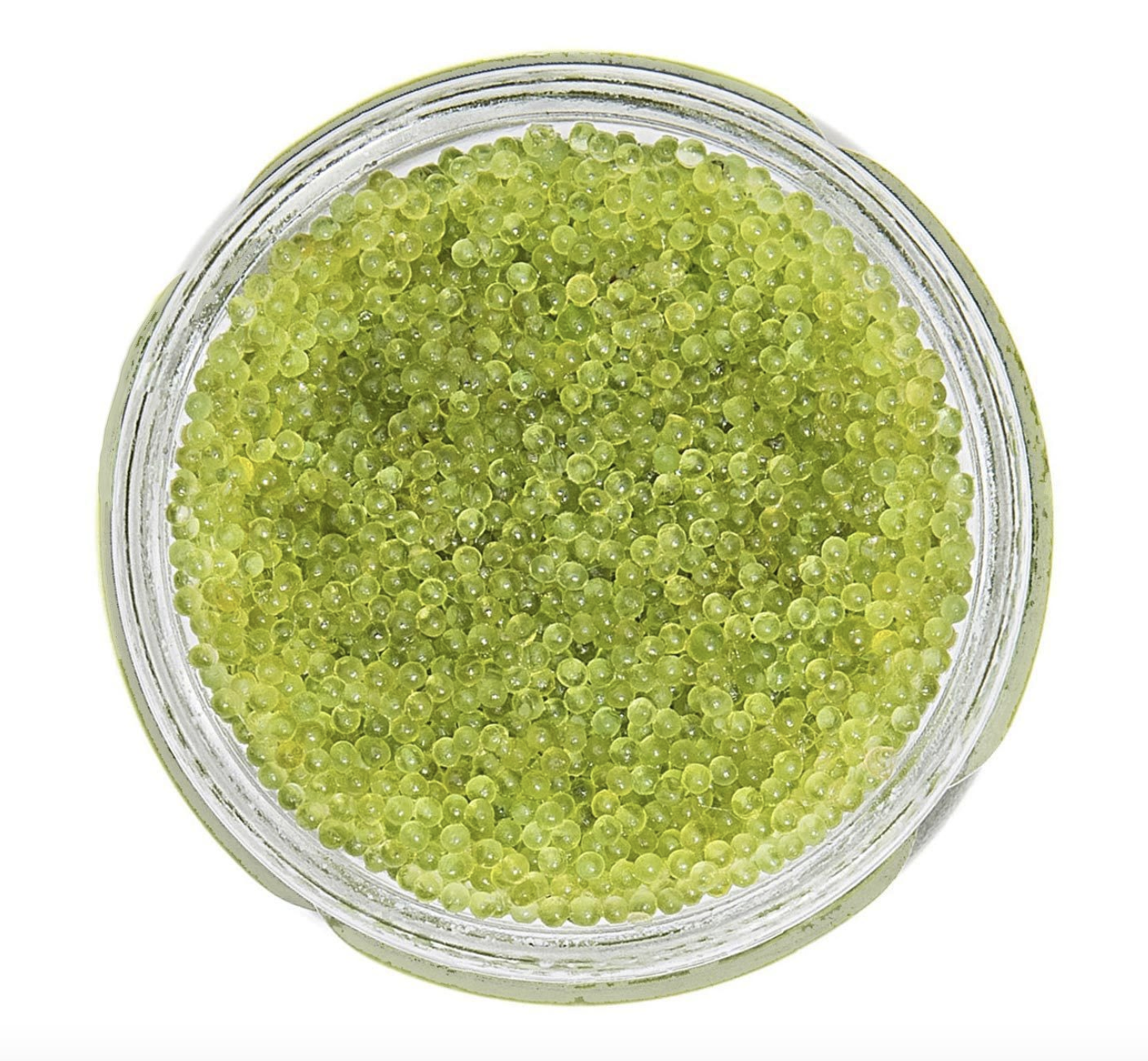 Green “caviar” could also come from seaweed rather than fish. Very rich in calcium and potassium, and originally found in Japan, the Philippines, Thailand, and Vietnam. It’s now being farmed elsewhere and is often called sea grapes.

Uncured roe is commonly called “green eggs” in the business, so this could commonly be confused with green caviar.

What color is the best caviar?

As you’ve read in this post, the color doesn’t always correlate to quality or price and there’s no consistent color rule. A good thing to keep in mind is that Sturgeon caviar is usually black to gold, gold being the rarest and most expensive if the quality is high, and roes are usually warm, bright colors like yellow, orange, red but can also include cheaper, dark-colored non-sturgeon varieties.

So, now that you know a little more about caviar colors, the next time you order caviar you’ll be able to make a choice based on your knowledge and more easily be able to recognize certain species. It’s always a good idea to experiment with the different types as much as you can and you’ll be able to figure out what caviar taste personally like best 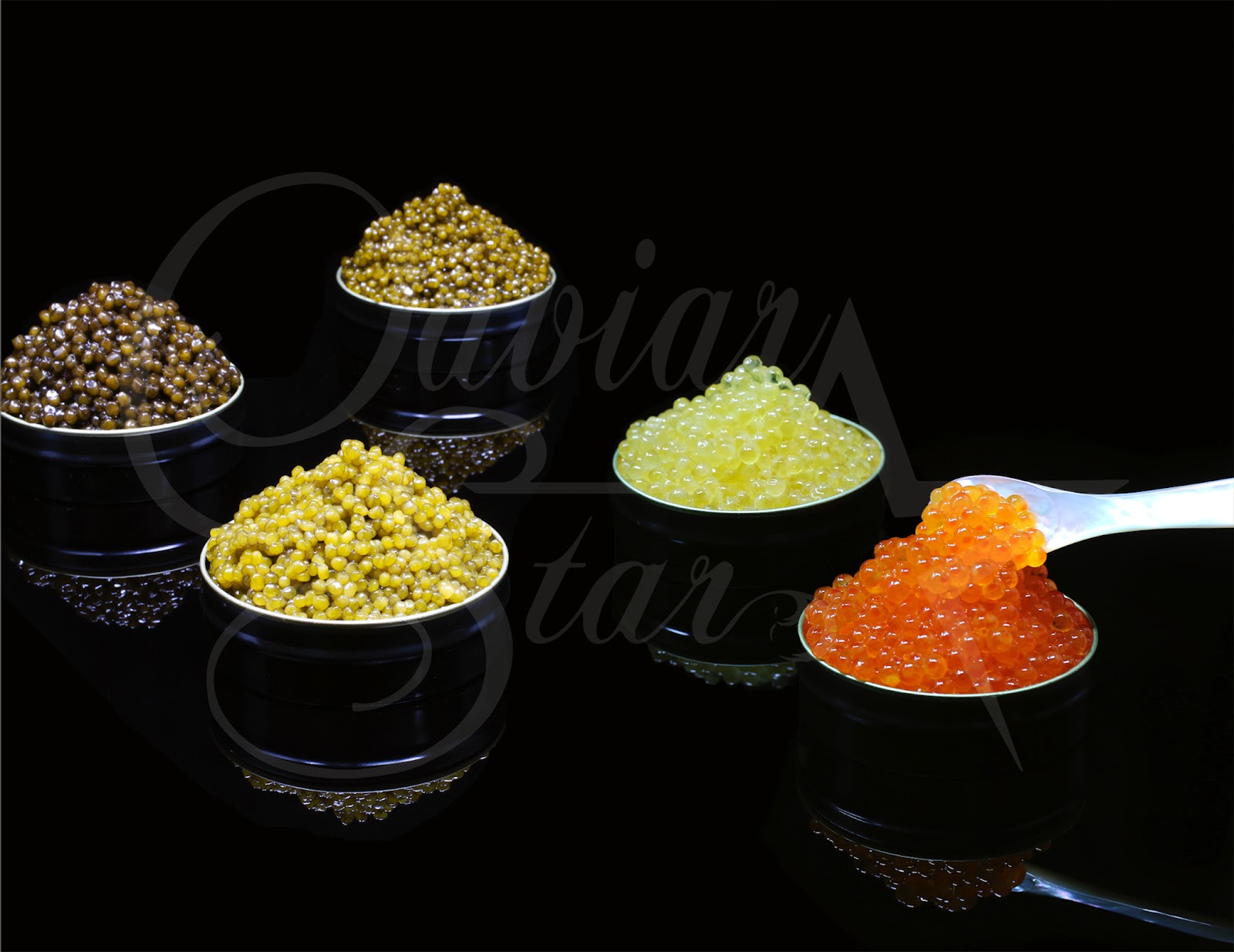