What Exactly Is Caviar?

Caviar is indeed one of the most luxurious foods in the world. However, the term caviar does not translate simply to "fish eggs". Real caviar comes solely from fish of the Acipenseridae family, also known as sturgeon. The eggs are harvested from the female sturgeon before fertilization and then cured with salt to enhance the flavor and increase the shelf-life of the finished product. This combination of unfertilized sturgeon eggs and salt is the delicacy known as caviar.

History of Caviar: Although humans have been eating fish eggs since prehistoric times, the word caviar didn't really exist before the modern area. 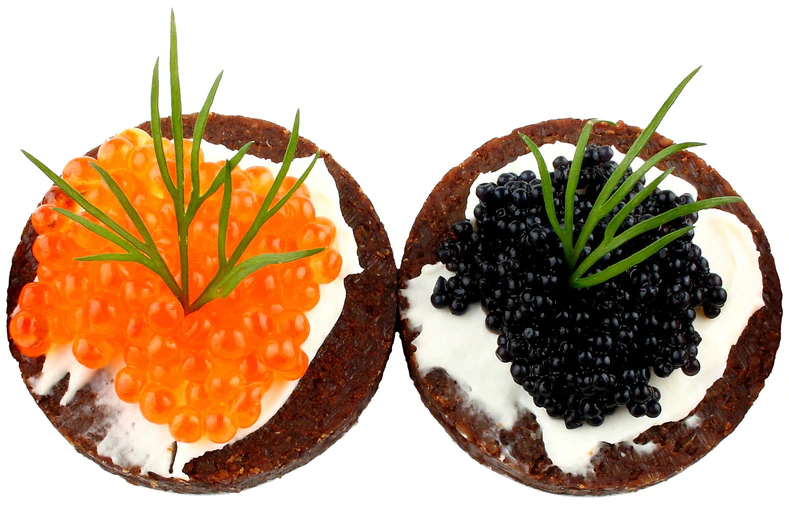 As we stated above, caviar is made solely from eggs of Acipenseridae fish, but that's not the only criteria a roe has to meet to be categorized as caviar. In most of the world, the eggs have to come from the right species of fish and be processed properly to be considered "true caviar". The  malossol or low-salt curing method is the best method to preserve fish eggs without compromising or overpowering their subtle flavors. Some sturgeon roe is salted at higher levels to increase shelf-life, and many non-sturgeon fish roes are cured to the low-salt model to maximize their quality, but unless it is malossol sturgeon roe it is not truly caviar.

Buying caviar in the U.S.A., however, does not mean receiving exclusively low-salt sturgeon eggs like it does in other countries. It is common practice for caviar sellers to label any salted-cured roe as caviar, including non-sturgeon fish species and even eggs from crustaceans and mollusks. Eggs that come from larger fish like salmon, trout, paddlefish, bowfin and whitefish are almost always sold under the name "caviar" in the United States, something which would be considered unlawful in other parts of the world. In order to be “true caviar,” the roe needs to come from the sturgeon family and be processed correctly.

Note: The United Nation’s Food and Agriculture Organization states roe from any fish besides the Acipenseriformes is not caviar, but caviar substitutes. Learn more about the differences between Caviar and Roe here.

There are an estimated  27 species of sturgeon still around today, of which, only around 10 to 12 different species are commercially fished or farmed for caviar. The popular sturgeon types for making caviar are traditionally the larger and/or longer living species which have ideal eggs for making quality caviar. Learn more about each of these sturgeon roes and the fish they come from below:

Beluga Caviar: One of the most well known caviars in the world is made from the largest freshwater fish and 2nd largest bony fish on the planet; the European sturgeon (Huso huso), or beluga (Russian white) sturgeon. Originating from the Caspian Sea, belugas were considered by Russian Tsars to be the most valuable of all the fish. They produce a sought-after and highly expensive caviar that has large grey pearls with a buttery fat content.

White Sturgeon Caviar: The largest freshwater fish in North America produces one of its best caviars with a true "product of USA" origin. White Sturgeon are native to the Eastern Pacific and have been  in freshwater estuaries from Alaska to Mexico. Although not quite as sizable or plump as the beluga and kaluga, white sturgeon caviar has similar color and flavor characteristics with a oilier, brinier finish.

Osetra Caviar: Osetra caviar comes from the Russian Sturgeon (Acipenser gueldenstaedtii) and is at least the second most well-known caviar in the world (behind beluga caviar). Originating from the same area as the Huso specie, Osetra are mid-size sturgeon with proportionately large eggs. It ranks highly as some of the best caviar of all time in terms of aesthetics, with amber to gold tinted eggs, and flavor, with its uniquely rich and nutty taste.

Siberian Caviar: Despite not being a house-hold name like some other river-venturing, caviar-producing sturgeons of Russian Siberia, the Siberian sturgeon (Acipenser baerii) is highly regarded for its briny, full-flavored eggs. Slightly smaller than Osetra, Siberian sturgeon are hardier, faster maturing and require less space than other mid-size sturgeon, making them an ideal caviar species for farm-raising.

Sevruga Caviar: Traditionally, sevruga caviar was the the "3rd tier" caviar of old Russia. With malossol Beluga and Osetra being reserved for aristocracy, sevruga from the smaller starry sturgeon (Acipenser stallatus) was a big hit with commoners. Malossol sevruga is smaller and softer type of caviar, but boasts such a rich "taste of the sea" that even autocrats couldn't pass up.

Sterlet Caviar: This caviar comes from the small-size sterlet sturgeon (Acipenser ruthenus). Another Eurasian native, the sterlet sturgeon produces eggs much smaller than its counterparts. It is not as impressive on the palate as other sturgeon roes, but is still enjoyed for its mild fatty and oily notes.

Hackleback (Shovelnose) Caviar: The 2nd sturgeon on this list originating from North America is also the smallest. What the roe from American Hackleback lacks in size it makes up for in bold traditional caviar flavor. The firm black beads of shovelnose fish are one of the only true caviars still harvested from the wild.

Other types of caviar you may see are: Adriatic Caviar, Amur Sturgeon Caviar, Persian Caviar

How Is Caviar Created?

Caviar and other non-sturgeon roes are derived from ripe, unfertilized eggs, which must first be removed from fish, carefully cleaned, salted and graded for quality before being packed, aged and delivered to consumers. Today, almost all sturgeon roe comes from farm-raised sources while the more abundant wild

When a caviar producing fish has fully reached adulthood, there are a couple ways in which its eggs can be harvested from the sturgeon and/or other fish. The most prevalent is still the classic method, where the entire fish is used for meat, skin, spinal fluid, isinglass, and, of course, caviar. The roe sac is removed from the dead fish and screened to separate the eggs from the membrane. The newer "no-kill" harvesting methods uses modern medical advances to safely remove each individual eggs without hurting the fish. Although perceptively more humane, the science is not quite there yet for this method, and traditional harvesting still produces superior quality caviar. You can learn about both of these harvesting methods here .

Once the eggs is extracted from the fish, they are washed with purified water and inspected. The imperfect caviar pearls are often removed from what remains. These eggs are rinsed with cold water and brined to meet the malossol model for proper salt content. The water is drained and the remaining salted roe is graded and packed in airtight containers called original tins (OT's) and stored at near freezing temperatures. All caviar is typically aged in OT's for at least a month so the eggs can fully absorb the salt and develop flavor before being enjoyed.

How do you eat caviar?

There are many ways to eat caviar, but the best way to appreciate the subtle complexity of a salted fish roe is to eat it with little to no accompaniments. Just take a spoonful, ideally not from a silver/metal spoon, and compare the texture-feels and tasting notes you get from each type. Looking for other new ways to use your caviar and fish roe? Check out some of the many recipes made with caviar or just pair it with the traditional creme fraiche and blini.

Caviar is growing more and more in popularity these days! There's never been a better time to get into the delicacy, or learn more about the history, types and industry today.


For more information on caviar, try one of these helpful articles:

What is the texture like when eating caviar or fish roe?

What is the difference between black caviar and red caviar?

What is the difference between caviar and fish roe?

How does the taste of a caviar substitute compare to real caviar?