Wild American Hackleback and Bowfin supply is at an all-time low. Here are the reasons why...

Water levels and temperatures have a direct impact on the ability to fish for wild sturgeon or their cousin species. If the rivers are flooded then debris can block and break nets. When water levels are too low it is harder to navigate the waters and fish tend to stay at very the bottom of the rivers or venture out to surrounding bodies of water.

Sturgeon are very resilient creatures and adapt to environmental conditions, thus why they have been around for millions of years!

Due to warming climate and flash droughts, the water levels of the Mississippi and Missouri rivers have been devastatingly low in 2022. So low that barges have even had difficulty floating along the river...

"The 2022 flash drought occurred within a long-term trend in which annual minimum water levels on the lower Mississippi River have declined over the past century. In other words, yearly lows are getting lower.

There are two primary causes for these extreme lows. First, construction of locks, dams and levees for flood management starting in the 1930s has impounded a growing share of the river’s flow upstream and decreased variations in the river’s flow. This has unintentionally made low-water events more severe.

This drought combined with unseasonable weather has been bad news for American caviar fishermen this season. The Hackleback fishing season usually slows down in the coldest winter months and starts back up again in early spring, if conditions permit. This being said, us and our partner fishermen have not seen American caviar fishing conditions this poor in almost 2 decades.

American Hackleback caviar is one of the most popular caviar options in the US due to its relatively affordable price (for fine sturgeon caviar), classic dark black color, consistent egg-size and clean, creamy flavor. Being the last commercially fished wild American Sturgeon, it is the American staple for domestic caviar.

Although the sturgeon family, Acipenseridae, has been around for over 200 million years, prehistoric Hackleback (scaphirhynchus platorynchus) have swam wild throughout the rivers of North America for over 70 million years, typically found in the Mississippi and Missouri river systems bordering Midwestern states. They are the smallest sturgeon in North America and mature relatively quickly compared to other sturgeons, rarely exceeding 30 inches in length or 5 pounds. They must be 7–10 years old before spawning can occur and can live 14 years and likely longer, some being found to live close to 40 years. They are benthic feeders, meaning they are "bottom feeders" that eat many types of fish and crustaceans along the base of rivers. Even though they are technically one of the fastest-growing sturgeons, strict fishing limits and regulations still need to be upheld to control wild populations. Some states, like Missouri, only allow sport-fishing of Hackleback because it looks very similar to the critically endangered "Pallid Sturgeon." Other states that allow commercial fishing, like Illinois, are extremely strict on regulations related to sturgeon maturity, size, spawning seasons, and the number of commercial permits allowed.

Another popular non-sturgeon fish commercially caught for roe consumption in Louisiana is the Bowfin (Amia Calva). They have been around for about 150 million years. Bowfin roe is small, very dark but with a slight reddish hue, and has a unique, mildly earthy flavor.

As a close cousin to sturgeon species, Bowfin are also also benthic feeders and spend majority of their lives looking for food along the bottom of rivers. Bowfin are special though because they have both gills and lungs. Our partners in Louisiana said this 2022/2023 season they've only able to catch a tiny portion of their usual quota. When asked why, they told us that it's never a clear-cut answer but they believe it has to do with the low water-levels combined with a very cold November and warm December 2022. They can see the Bowfin pop up to the surface to gulp air but otherwise, they have been laying dormant and somehow evading the fishermen's nets.

On the other hand, the American Paddlefish is less affected by water levels because it's a filter-feeder. Paddlefish (Polyodon Spathula) is another cousin to sturgeon and the oldest living species in North America at 300 million years old! Paddlefish have to move around more to gather food, meaning they are more-likely to end up in lakes and tributaries than Hackleback or Bowfin. Since they are more-likely to swim to areas with higher water levels, Paddlefish are more easily caught when river droughts occur. Paddlefish roe is usually about the same pearl-size or slightly larger than Hackleback, but the main distinction between the two is that Paddlefish is gray to green colors and has a stronger, earthier flavor.

Due to the Bowfin and Hackleback shortage ahead in 2023, we anticipate Paddlefish demand to rise and potentially cause supply issues later on.

Severe weather, low water temperatures, and flash river droughts have made it very difficult for fishermen to navigate waters and catch fish this year. This paired with the highest demand for Hackleback and American roe ever has made for an unprecedented shortage.

When should we see supply come back? We anticipate with winter and spring rainfall and warming spring temperatures, fishing conditions should improve around March. However, if this severe weather pattern of very hot summers and flash floods and then extreme winter storms and low temperatures persists, there might be less American caviar available year after year...

Unfortunately, mislabeling caviar species occurs in the caviar industry by companies that are miseducated by suppliers or re-sellers who want to dishonestly make a profit. Once caviar is in the hands of the person branding it, it is up to them to decide how to label it as long as it meets FDA guidelines for ingredients and storage directions. Unless you look at and sample caviar every day for decades like we have, it can be hard to recognize the very slight differences in looks and taste between certain species... This being said, look out for "Hackleback" caviar with very small eggs and a red tint (it could be Bowfin), or if the eggs are very large and it's extra creamy or slightly nutty tasting (it could be dark, lower-grade White Sturgeon). Hackleback eggs should be jet black, occasionally with minimal flecks of gold/earth tones. It is semi-small, semi-firm, clean, slightly creamy flavor with a touch of minerality/earthiness, due to being wild.

Here is a photo of what Hackleback typically looks like in a 2oz (56g) jar: 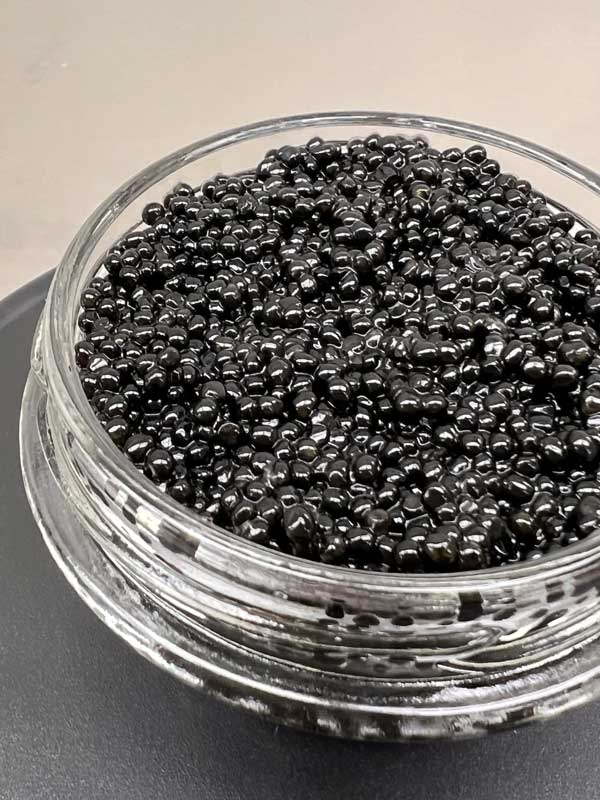 We have always been passionate about holding up the integrity of each individual species and being transparent about where it's coming from, so when you buy caviar from Caviar Star, you can be 100% sure that you're enjoying the species as advertised... If fishermen aren't catching and your favorite wild roe is out of stock, contact us and we'll suggest another species to help meet your preferences!