By definition, isinglass is a pure, transparent, or translucent substance obtained from the dried swim bladders of fish. It is a form of collagen that is used mainly for the clarification or fining of some beer and wine, but can also be used in thickening jellies or made into a paste forr specialized gluing purposes. (see more on isinglass)

The word isinglass originated from the Dutch word huizenblaas, which translates to sturgeon (huizen) bladder (blaas). Sometimes called "Sturgeon Glue", isinglass from dried sturgeon bladders is one of the strongest, cleanest and highest quality when compared to isinglass from other species of fish.

Throughout the 19th and 20th century, many sturgeon species from around the world, especially the beluga sturgeon, were fished so heavily that they nearly went extinct. Many know the sturgeon for its prized "true" caviar and attribute the decline seen in sturgeon populations to the demand for their eggs. However, the demand for sturgeon isinglass was also a contributing factor to their near-extinction in years past.

Today, isinglass is rarely sourced from sturgeons, as the isinglass from cod, hake and other more abundant species of fish have replaced it. 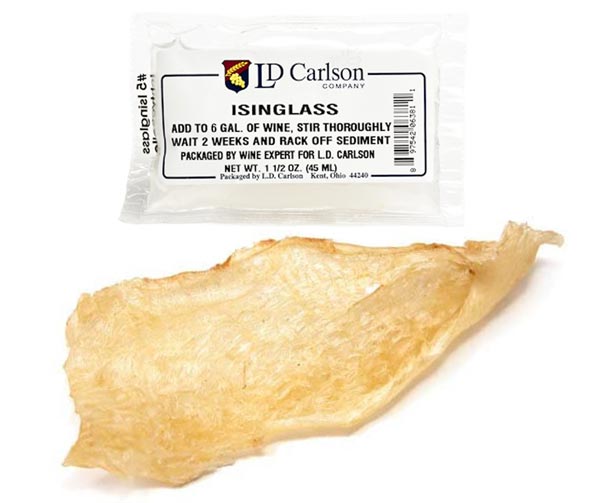 What is isinglass used for?

As a product, isinglass has been used in food and drinks as a preservative and in efforts to conserve parchments. Gelatin, and other competing products, have replaced isinglass in foods due to inexpensive production costs.

Isinglass is most widely used as a clarifying agent for wine and beer. The use of isinglass finings in drinks accelerates the clearing process of sediments that settle at the bottom of barrels (casks, etc). Today, very little isinglass remains in such drinks. Since isinglass is sourced from fish, many vegetarians consider drinks processed with isinglass finings to be unsuitable for their diets.

Isinglass was used as a preservative for eggs during (and before) World War II in the United Kingdom and has been used as a means to repair parchment. However, the main use of isinglass in the modern world is for the clarification of beer and wine. Other uses of the substance have been replaced by less expensive alternatives.