With the terrible war occurring in Ukraine right now, we have had quite a few people asking about whether or not any of our caviar is actually sourced from Russia... I’m writing this to help clear up some confusion about Russian caviar in America.

Most people who know of caviar know that it has ties to the Caspian Sea, so it makes sense that there is confusion about where this old-world delicacy actually originates nowadays. 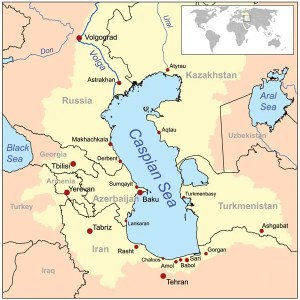 The Caspian Sea is coveted for its original, native Sturgeon species (Beluga, Osetra, Sevruga). However, due to overfishing for caviar in the 19th and mainly 20th centuries, many countries' environmental protection agencies have worked hard to justly outlaw the catch of wild sturgeon in the Caspian Sea and allow for wild populations to avoid critical endangerment and extinction. For the US and much of Europe, this means that Wild Sturgeon Caviar is illegal for import, period.

To answer the question - Do we get Russian caviar in the US? … No, we do not get caviar from Russia anymore. Actually, most countries, even other parts of Europe, do not receive it for a few reasons, one being that Russian caviar is consumed domestically by Russian citizens. They love their caviar and it’s still a short-supplied delicacy for them due to the very high demand. Even if it’s Russian farmed caviar, we still don’t see it over in the US because it doesn’t make sense for them to export it when they already have a huge market. Caviar can be farmed all over the world, so exported Russian caviar would be extremely and unnecessarily expensive compared to other options.

The main reason is that WILD Sturgeon caviar is illegal for import now is environmental conservation. The US Fish and Wildlife outlawed wild sturgeon caviar more than 20 years ago to protect endangered species, and shortly after outlawed the most-coveted pure Beluga caviar to be imported to the US. This is why you see farm-raised “Beluga Hybrid” caviar as an alternative now. This was done in an effort to help save the Beluga species from continuing to be poached and illegally smuggled as “non-wild” after the wild sturgeon ban. The only exception to pure Beluga in America is “Sturgeon Aquafarms” in Florida. They are able to farm-raise Beluga because they flew over young Beluga hatchlings before the ban went into place.

Americans are one of the world’s largest consumers of caviar, so bans in America were necessary to protect populations. American Hackleback is the last wild sturgeon in North American that is able to be caught wild. The Pacific Sturgeon (White Sturgeon) swims wild in Northern California rivers but is not legal for consumption unless farm-raised, like at Sterling Caviar Farms.

*The main confusion with people in America believing they are enjoying “Russian” caviar is because the common name of one of the best caviars on the market is the “Russian Sturgeon.” The species is Acipenser Gueldenstaedtii, but you may know it as Oscietra, Ossetra (We mostly just call it Osetra nowadays in America). The common name of Osetra is the “Russian Sturgeon” because it’s one of the “OG” sturgeons from the Caspian Sea in Russia, similar to how a Acipenser Baerii is called the “Siberian Sturgeon” and the Acipenser Transmontanus is known as the “Pacific Sturgeon” (also "White Sturgeon"). The type of sturgeon usually correlates to the original geography of the species or the physical characteristics.

Ironically, many companies and brands before this most recent Russian/Ukrainian war actually preferred to put “Russian Sturgeon” on the label in place of “Osetra” to tout authenticity. I honestly never liked the sole use of that on labeling because I believe it creates confusion about the origin of the caviar. Now brands are quickly dropping the word “Russian” to sever any notions that it supports Russia.


P.S. We are currently partnering with chefs for events that are fundraising Ukrainian relief efforts and the World Central Kitchen through caviar donations. If you are participating in an event for Ukrainian relief and would like donations or support, please contact [email protected].